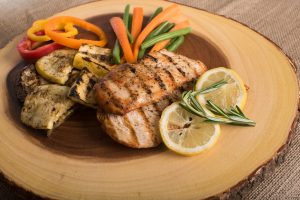 High-protein, calorie restricted diets are popular and have been shown to be effective for obesity. However, the precise mechanisms are unknown.

One factor in obesity is the intestinal microbiome – the microbes found in the digestive tract. This leads to the question – does a high-protein, low-calorie diet alter the microbiome to support weight loss and maintenance?

Although it has been found that a high protein diet can enhance weight loss, we are yet to fully identify all of the mechanisms behind this.

High protein diets promote satiety and are associated with reduced energy intake compared to normal protein diets. It has been suggested that weight loss is secondary to increased thermogenesis and preservation of lean body mass.

There is a body of evidence that shows the intestinal microbiome plays an important role in the development of obesity. Long-term dietary patterns are correlated with microbiome composition, and interventional diets can rapidly change the composition. This raises the possibility that the microbiome is involved in the response to weight loss diet.

Previous studies have found that higher dietary protein intake can influence microbial species that are associated with lower body fat mass. The researchers hypothesised that high protein diets can modulate the microbes associated with obesity and related metabolic diseases.

An 8-week randomized clinical study was created to compare the effect of isocaloric high and normal protein diets on the intestinal microbiome in overweight and obese subjects.

Participants were aged between 20-75 years with a BMI between 27-40 and either non-smokers or smokers with stable habits and willing to maintain their smoking habits during the study. They were also screened for metabolic syndrome, but those with metabolic syndrome were not excluded.

Exclusion criteria included significant weight change of >3kg in a month or >10kg in 6 months prior to screening, a calorie restricted diet for 4+ months of the previous 12 months, abnormal lab parameters such as TSH, total cholesterol, triglycerides or liver enzymes, pregnancy or consumption of more than one alcoholic beverage per day.

The diets were implemented in two phases – an initial diet with no calorie restriction for 2 weeks, then the same diet with a deficit of 500 calories from their calculated metabolic rate for 6 weeks. Both groups received dietary counselling during the baseline visit and the 2 week visit when the deficit was introduced.

All participants were provided with faecal testing kits for home sampling at baseline, week 1, week 2, week 4, week 6 and week 8.

Participants in the HPD group showed a significant increase in microbial diversity compared to those in the NPD group.

Both groups saw changes in the microbial composition, including enrichment of Akkermansia spp. and Bifidobacterium spp. and depletion of Prevotella spp. This was attributed to the encouragement of consuming carbohydrates from high-fibre sources in both groups.

Calorie-restricted diets with high or normal protein content led to an increase in Akkermansia spp. and Bifidobacterium spp. and a reduction of Prevotella spp.

Some limitations were noted by the researchers. Using dietary counselling rather than meal replacement or provided meals introduced variation in adherence to the prescribed plan. The cohort was predominately male due to the recruitment location, so the results may not be applicable to females. The sample size was not sufficient to detect a difference in clinical outcomes such as weight loss.

Further studies are needed to clarify the impact on protein and calorie restricted diets on the microbiome, as well as the microbiome’s influence on obesity and weight loss.

Many of us find it a challenge to talk to people we’ve never met. However,…

Do you have the right systems in place to survive the Christmas season?

For many small businesses, holiday periods can be a time of both pleasure and pain.…

The food and macronutrient combinations that promote weight loss: A Systematic Review

There are thousands of suggestions on how to lose weight using dietary interventions, but how…

Often, diets focus on removing foods that can cause weight gain. Despite reducing calories, many…